North African country has been beacon of stability in troubled region

At least one man died in clashes that broke out Monday night between dozens of protesters and security forces in the town of Tebourba, near the capital Tunis, according to the state-run TAP news agency. Tunisia's Interior Ministry on Tuesday denied reports that the dead man was run over by a police car and said it was investigating the cause.Police had arrested 328 people over the unrest as of Thursday, TAP cited Interior Ministry spokesman Colonel Major Khelifa Chibani as saying. He added that 21 police officers had been injured.More protests have been called for Friday, as a new youth movement and opposition lawmakers try to put pressure on the government to overturn the austerity measures. The protests have raised fears of wider unrest in Tunisia, the North African nation which spawned the 2011 Arab Spring movement but has since been seen as a zone of relative stability in a troubled region.

What are the protests about?

Tunisia's government has increased taxes under the 2018 Finance Act. The new budget raised value-added tax (VAT), or sales tax, on cars, alcohol, phone calls, the internet, hotel accommodation and other items, according to the Reuters news agency. The austerity measures come at a time when Tunisia's economy is struggling. Its important tourism sector has not yet recovered following deadly terror attacks in Sousse and Tunis in 2015. Inflation in Tunisia currently runs at about 6% a year, which is eating away at people's earnings, and the tax hikes will hit those with the least hardest. 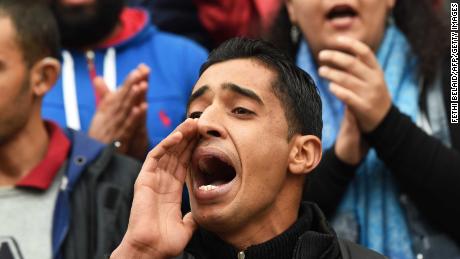 The International Monetary Fund agreed in 2016 to a four-year loan program worth about $2.8 billion but payments are tied to the Tunisian government carrying out economic and social reforms.Dr Lise Storm, senior lecturer in Middle East Politics at the University of Exeter, told CNN that many people were suffering real hardship but that the government had to act. "What people are protesting about is something that's painful but needs to happen," she said. "Tunisia really needs painful economic reform."Protests are common in Tunisia in January, when many people mark the anniversary of the toppling in 2011 of the country's longtime autocratic leader, President Zine el Abedine Ben Ali. The towns where unrest has broken out — including Tunis, Sidi Bouzid and Kasserine — have often been the location for protests in the past, Storm said.Storm considers the protests a "healthy sign" that the country's authoritarian legacy has waned because they show that people dare to speak out about their frustrations — just as they do in the West, sometimes violently. "Until democracy consolidates, I think it's a good thing that people feel they have the opportunity to demonstrate," she said. 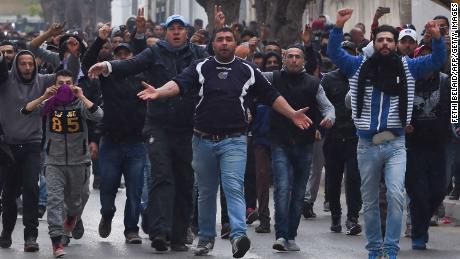 Who's behind the protests?

The protests appear to have broken out spontaneously at a local level among people who have very little and are feeling desperate, said Storm.A new, informal youth movement calling itself Fech Nestannew — or "What are we waiting for?" — sprang up at the start of the year and is now using social media to rally opposition to the price hikes.The group, which uses an alarm clock as its logo to symbolize the need for population to wake up and act, puts its own membership at about 6,000 across the country, with hundreds of members in Tunis. Representatives say it is a loosely organized grassroots movement with no leader. Some of its members belong to opposition parties, while others are independent.Henda Chennaoui, a founding member, told CNN on Tuesday that the movement's goal is to get the 2018 Finance Act overturned. Its members are explicitly anti-austerity and will rally until this happens, she said, adding: "We won't stop marching until our demands are met."People feel intense anger toward the government over the economic situation, Chennaoui said, and the Finance Act was the last straw. More than 20 of the group's members were briefly detained after Sunday and Monday's protests, she said, but nobody remains in custody.The movement has called for more protests on Friday. 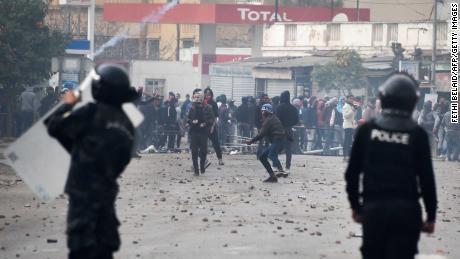 What do the authorities say?

Prime Minister Youssef Chahed called Wednesday for an investigation into incidents of destruction and violence, saying criminal networks were exploiting young people to "loot and ransack," according to TAP. Chahed also said the government must work to restore the hope and confidence lost by the nation's young people following the 2011 revolution.Finance Minister Ridha Chalghoum said the price hikes were necessary to help the country's economy grow."The taxes do not affect consumers' shopping basket regarding foodstuffs and other things, because these are not under VAT," he said."Among the achievements of democracy is the ability to organize and protest. But one must also work to make the Tunisian economy healthy. An economy in which the growth which has begun in 2017 can be consolidated."Ennahdha, the Islamist party in Tunisia's governing coalition, condemned the violent aspect of the protests and what it described as "the exploitation of citizens' legitimate demands by certain anarchist groups" in a statement posted on its Facebook page Tuesday."Ennahdha stresses the legitimacy of demands for development and employment and citizens' full right to peaceful protest without violating the safety of others or attacking private and public property," it said. 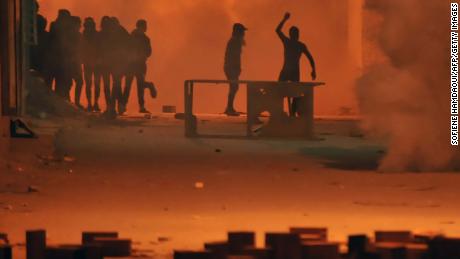 What does the opposition say?

The leader of Tunisia's main opposition Popular Front Party, Hamma Hammami, called for the continuation of the protests at a press conference Tuesday, according to a video statement posted on his Facebook page. "The Front is calling all Tunisian people go out to the streets for a peaceful protests country wide for one clear goal, which is to bring down these actions that destroyed the Tunisian country and its people," Hammami said.

What is the political backdrop to the protests?

Anti-government protests began in Tunisia in December 2010 amid anger over economic conditions and quickly spread throughout the Middle East and North Africa.Subsequent elections have given power to the moderate Islamist Ennahda party and the secularist Nidaa Tounes party, led by President Beji Caid Essebsi and seen as representing the old brigade. A series of sometimes violent demonstrations have broken out over the years, motivated by political, economic and social concerns.Despite the latest flurry of protests, Storm does not believe Tunisia's future is any more uncertain now than it was two or three years ago."While Tunisia is politically unstable, it does not look like a return to authoritarian rule is on the cards," she said. "You might see a cabinet reshuffle or elections, but these are part of the democratic fabric. Tunisia is not yet a consolidated democracy, hence, why it is unstable."The fact that Tunisians have protested under various regimes since the Arab Spring, including Ennahda and Nidaa Tounes, can be seen as another healthy sign of a functioning democracy, Storm added.