He suffered years of abuse from his former owner before he was rescued by a South Korean animal rights group. After two more years living in a shelter, the mutt became South Korea's First Dog in June 2017.Tori was taken in by the newly elected President Moon Jae-in. Adopting a dog had been one of Moon's campaign promises, aimed at raising awareness of abandoned dogs and animal rights. The dog now enjoys the manicured gardens of the Presidential Blue House where he's since been joined by two Korean hunting dogs, a gift to Moon from North Korean leader Kim Jong Un. Tori's story is emblematic of a shift in attitudes across South Korean society as dogs go from the dinner table to treasured companions. 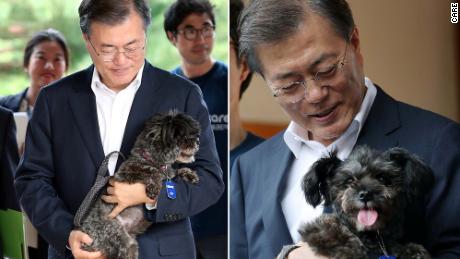 For decades, South Korea has faced criticism over its treatment of animals and the country's ongoing custom of consuming dog meat. International animal rights groups have worked to rescue dogs from farms in South Korea and relocate them overseas, including in the US, UK and Canada. According to Humane Society International (HSI), nearly 1,600 dogs have been rescued from 13 farms in South Korea since 2015, the year the organization began the campaign.The number of South Koreans who eat dog meat has been declining in recent years, while the number of households keeping dogs as pets has increased exponentially. South Korean animal rights activistshave been at the forefront of shutting down the dog meat trade. In Seoul, official statistics show the number of restaurants serving dog fell by 40% between 2005 and 2014, due mainly to reduced demand. Two bills have been proposed at the National Assembly to exclude dogs from the livestock category so they cannot be raised for meat, and to ban the feeding of dogs on food waste, a practice that is common on dog farms. If these bills pass, the already shrinking dog meat industry may nearly collapse. 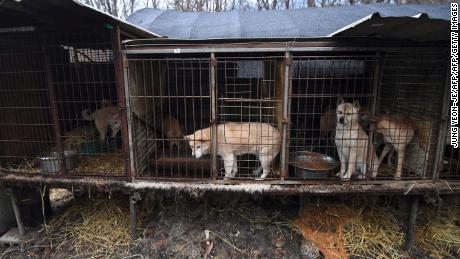 Last month, authorities in Seongnam, a satellite city of Seoul, shut down Taepyeong, the country's largest dog slaughterhouse, where hundreds of thousands of dogs were killed each year by electrocution before being sold for meat, according to HSI."This really feels like a landmark moment in the demise of the dog meat industry in South Korea and sends a clear message that the dog meat industry is increasingly unwelcome in Korean society," said HSI's Nara Kim at the scene of the closure.Kim is one of a group of activists working with dog farmers who want to move away from the industry, providing them with financial support. "We have worked with 13 farmers and all of them came to us and asked for help because they admit that this industry is dying," Kim said. 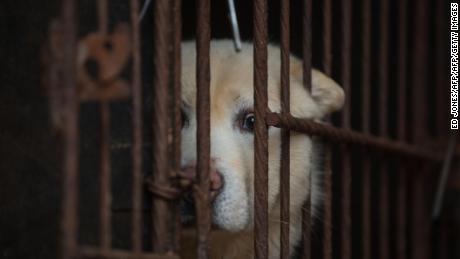 According to a survey by Gallup Korea in June 2018, about 70% of South Koreans said they would not eat dog meat in future — up from 44% in 2015. South Koreans' changing perception of dogs can be attributed to multiple factors, but several experts stressed the need for companionship in an increasingly competitive and atomized society."Increasing single-household numbers and a relatively high level of stress experienced from interacting with people in South Korea might have contributed to this change," said Suh Eun-kook, a professor of psychology at Seoul's Yonsei University. "People judge people but dogs don't judge people. Instead, dogs give us unconditional satisfaction. This unconditional love from dogs seems to have contributed to a growing popularity of keeping dogs as pets."One in four South Korean adults now keeps a pet, and the average owner spends about $90 every month on them, according to research by the KB Financial Group. As pet ownership has grown, businesses offering goods and services such as insurance, day care centers and grooming shops have proliferated. According to NongHyup, the National Agriculture Cooperative Federation, South Korea's pet industry was worth $1.14 billion in 2013, but quickly increased to $3.4 billion by 2017. It is expected to reach $5.4 billion by 2020. 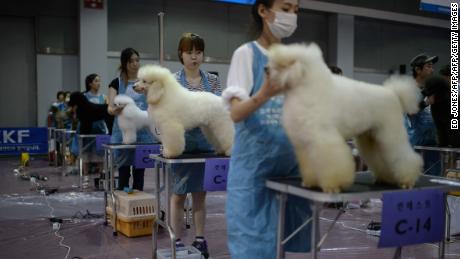 On the streets of Seoul today, it's not hard to spot pampered pooches dressed in the latest fashion. Department stores carry organic pet food, dog beds featuring Egyptian cotton and strollers imported from France. Every month, Ahn Da-som takes her small brown poodle, Angum, to a doggie spa located in relentlessly trendy Cheongdam-dong, part of Seoul's Gangnam district. "She's really like a member of my family so I want her to look very good all the time. I want her to be clean all the time because she's just like me," Ahn said.The spa includes a day care hotel, grooming salon, cafe and an events space that can host birthday parties. The whole building has a top-of-the-line ventilation system to keep interiors free of Seoul's pervasive air pollution. 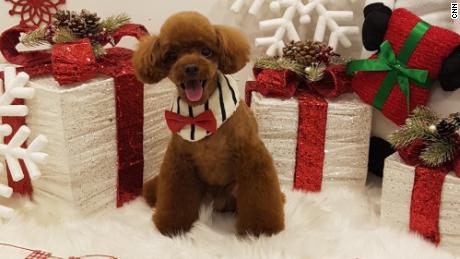 When CNN visited, Angum was booked for a teddy bear haircut. She started with a relaxing bath, before beginning a three-hour grooming session with regular breaks for pampering and de-stressing. The session costs around $100. "It used to be the young generation who were interested in having dogs as pets — but now it feels it's not only for the younger generation," said Ahn, 29. "The change has been dramatic."At the day care center downstairs, four trainers were looking after two dozen mostly small dogs. In densely populated Seoul, where most people live in high-rise apartments, taking dogs for outings to parks or elsewhere can require advance planning or a car journey. Day care centers provide a place for dogs to socialize and get their daily exercise. "I like the spa here the most… here my dog gets good massages and gets to play with other puppy friends," said Lee Soo-ah, who takes her bichon frise to the center four times a week. After her bath and grooming session, Angum emerges a new dog. She then poses for a beauty shot wearing a red bow, seated on a white furry carpet in front of a photo wall decorated in a Christmas theme. While not all dogs get such luxurious treatment, the transformation of their status in South Korea seems clear. While some dog farmers are clinging onto the trade as part of of the country's culinary tradition, today a dog is much more likely to appear in a family's photo album than on their dinner table.

Kapil Sibal takes a dig at PM Modi, thanks him for ‘speedy response’ during Delhi violence