Cyclone Kenneth: Thousands of people evacuated in Mozambique ahead of major storm

The storm had maximum sustained winds of 220 kph (140 mph) — the equivalent of a Category 4 hurricane.Kenneth comes a little more than a month after the country was dealt a devastating blow by the deadliest and costliest storm in its history — Tropical Cyclone Idai.Kenneth is the strongest tropical cyclone to hit Mozambique in known history.The National Institute of Disaster Management in Mozambique said it had provided shelters and begun "compulsory evacuation" of families to the shelters.In addition to the dangerous winds and storm surge, Kenneth will bring torrential rainfall and significant flooding. More than 20 inches of rain is projected over the next four days — roughly four times the average monthly rainfall for the region.Kenneth strengthened rapidly Wednesday and continued to intensify Thursday morning. Landfall was expected approximately 1,000 kilometers (620 miles) north of where Idai struck. "Residents along the Mozambique/Tanzania border should make preparations for storm surge along the coasts, heavy rainfall, and hurricane-force winds," NASA warned.In Tanzania, Kenneth is expected to hit the coastal areas of Dar es Salaam, the port city of Tanga and Pemba Island, according to the Tanzania Meteorological Agency. Strong winds and rain may affect the Lake Victoria basin, its mountainous regions and the coast, forecasters said. 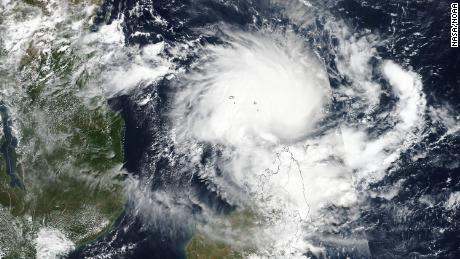 Local authorities in Tanzania advised residents to stay indoors in these areas for their safety.While the zone slammed by Idai will be spared, Kenneth still will strike Mozambique just one month after that storm killed more than 700 people and displaced tens of thousands. It caused an estimated $1 billion dollars in damage, or nearly 10% of the nation's gross domestic product.

Kenneth should be less devastating than Idai

Kenneth's impact is not expected to be as devastating as that of Idai, which delivered heavy rains for days before and after making landfall on March 15, with winds near 175 kph (109 mph). Idai's sustained rainRead More – Source

Nigerians return home with a warning to others: Don’t go to Libya

Pretoria says it will formally protest US President’s ‘shithole’ remarks