LONDON — Boris Johnsons pillaging of the Donald Trump playbook continues. And it seems to be working.

At the launch on Wednesday of his campaign to replace Theresa May as Conservative Party leader, the former U.K. foreign secretary had the press on the back foot, as an audience of Conservative MPs backing his leadership bid booed and hissed at reporters over a probing question.

Why do people who worked with him “not think you are fit to be prime minister,” Sky News Beth Rigby wanted to know, and challenged him to comment of his comparison of women who wear the burqa to “letterboxes.”

The response from Johnsons backers may not have been quite as threatening as the rowdiness and violence of a Trump campaign rally, but the contempt on display was worryingly out of character by the standards of phlegmatic Tory Englishness.

Journalists are right to be worried about Johnsons not-so-tacit endorsement of MPs rude behavior.

Johnsons newfound readiness to antagonize the press is worrying.

After MPs finished jeering, Johnson quipped, “Occasionally some plaster comes off the ceiling as a result of a phrase I may have used.” He came close to apologizing, then skirted the issue and added, to applause: “The public want us to talk straight and say what we really think.”

This claim of speaking plainly — not kowtowing to politically correct speech — is a big part of what drove support for U.S. President Trump over his competitors for the Republican nomination during the primaries in 2016. And its still key to his unswayable popularity among the minority of American voters who put him in office.

Trump has perfected the art of lying in public. His view is, basically: Go big or go home. If you keep the untruths coming, there wont enough newspaper space to debunk them all. And hes not entirely wrong.

Johnson seems similarly immune to attacks on his honesty. Earlier this week, the former foreign minister laid out plans in a column in the Daily Telegraph for a massive, roughly £9.6 billion tax cut for high earners. In his campaign launch speech, he promised to rebuild public services. But didnt say where the money would come from. 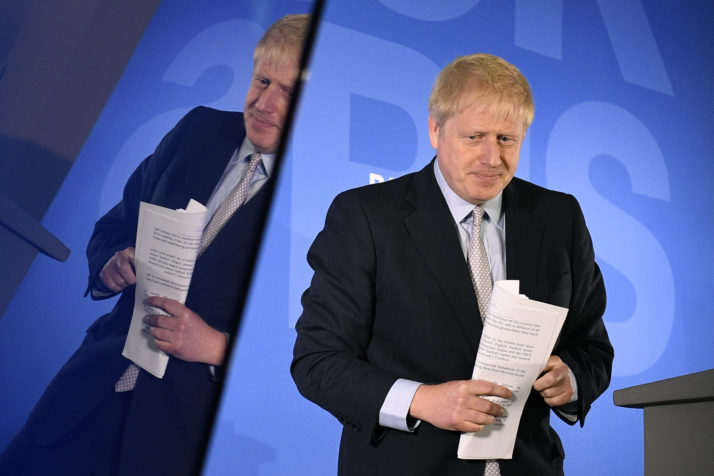 Say anything, promise anything — dont worry about how to carry it out. Its a strategy thats worked well for the U.S. president so far. So, its no surprise, really, that Johnson should be trying it on for size.

Despite the obvious existing parallels between the two firebrand, coiffured politicians, Johnsons newfound readiness to antagonize the press is worrying. A former journalist himself, Johnson knows — unlike Trump — how the sausage is made, even if he didnt pay much attention to best practice in his career. And as a politician, the former foreign secretary was always willing to make himself available to reporters and give good quote.

Those days are over, apparently. In the weeks after May announced her resignation, Johnson was more than uncharacteristically reticent and withdrawn as the race to replace her kicked off. Other than his Monday morning column for the Daily Telegraph, he was nowhere to be seen.

Then, in a classic Trumpian move, he severely restricted questions at the presss first opportunity to question him since he declared his candidacy. By choosing where and when to meet reporters and packing the room with partisans encouraged to show their emotions, Johnson made sure he would come out looking good.

People like to say of clever politicians, hes playing chess while his opponents are playing checkers. When it comes to Trump — and now Johnson — its more like the Read More – Source

Silvio Berlusconi, the candidate of calm